Review and interview by Shree Parkadkar at The Toronto Star, “New book on Canadian racism firmly refutes ‘We’re not as bad as U.S.’ sentiment” 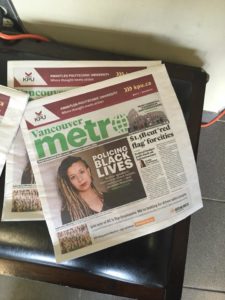 in “Plus qu’on est fous, plus on lis!”, Radio-Canada, “L’essaie Policing Black Lives”,

Feature in CBC Books, Ryan B. Patrick, “How I wrote it”:  Why Robyn Maynard wrote a book exposing the underreported history of racial injustice in Canada”

Review and event coverage in the Ottawa Citizen, “Author tells Ottawa audience that blacks have been ‘dehumanized’ for centuries in Canada”

Review in Literary Review of Canada, “Slavery’s long afterlife in the North”

Review in the Winnipeg Free Press, “Legacy of Shame”

Q & A in CBC News, Benjamin Shingler, “New book traces history of anti-Black racism in Quebec and across Canada

Featured in CBC Books, Ryan B. Patrick “3 books to read if you enjoyed Ta-Nahesi Coates’ We Were Eight Years in Power”

Excerpt in The Walrus

Review and event coverage in The Signal, Robyn Maynard visits north-end Halifax to unravel origins of racism in Canada

Review and interview in The Uniter,  Policing Black Lives:  A ‘national issue with longstanding historical roots’

If you like Robyn's work and would like to offer financial support, feel free to donate here.