Robyn Maynard is an author and scholar based in Toronto, where she holds the position of Assistant Professor of Black Feminisms in Canada at the University of Toronto-Scarborough in the Department of Historical and Cultural Studies. She is the author of Policing Black Lives: State violence in Canada from slavery to the present (Fernwood 2017). The book is a national bestseller, designated as one of the “best 100 books of 2017” by the Hill Times, listed in The Walrus‘s “best books of 2018,” shortlisted for an Atlantic Book Award, the Concordia University First Book Prize and the Mavis Gallant Prize for Non-fiction, and the winner of the 2017 Errol Sharpe Book Prize. In 2018  the book was published in French with Mémoire d’encrier, titled NoirEs sous surveillance. Esclavage, répression et violence d’État au Canada. Translated by Catherine Ego,  it won the 2019 Prix de libraires in the category of “essais.”

Her most recent published work, co-authored with Leanne Betasamosake Simpson, is titled Rehearsals for Living, and was recently published with Knopf (Canada), Haymarket: Abolitionist Paper Series (US/UK), and is forthcoming with Memoire D’encrier (French translation). The book is a Toronto Star, Globe and Mail, and CBC National Bestseller. An author interview on the book, “Every day we must get up and relearn the world” was recently published in Interfere journal, and Simpson and Maynard shared excerpts from the text at Simon Fraser University Library Dean’s Lecture on Information + Society (video here).

Maynard is the winner of the “2018 author of the year” award by Montreal’s Black History Month and was nominated for Writer’s Trust Dayne Ogilvie Prize for LGBTQ Emerging Writers. She has published writing in the Washington Post, World Policy Journal, the Toronto Star, TOPIA: Canadian Journal of Cultural Studies, Canadian Woman Studies, Critical Ethnic Studies Journal, Scholar & Feminist Journal, as well as an essay for Maisonneuve Magazine which was the “most-read essay of 2017”. Her writing on borders,  policing, abolition and Black feminism is taught widely in universities across Canada and the United States, including her most recent peer-reviewed publication “Police Abolition/Black Revolt,” published in TOPIA.

Maynard contributed to the research and writing for the Defund the Police website and recently authored two toolkits: “Building the World We Want: A Roadmap to police-free futures in Canada.” and “What is Prison Abolition in Canada?” With Pascale Diverlus, she co-hosted the Building the World We Want abolitionist learning lab and a monthly public education learning series.

If you like Robyn's work and would like to offer financial support, feel free to donate here. 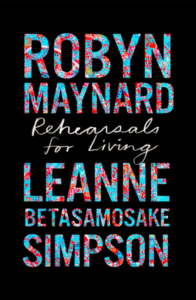 By Robyn Maynard and Leanne Betasamosake

“This book must be read for its future vocabularies, its political intimacies, its careful assemblage of the materials of our activisms, and its generous and fulsome thinking.”
—Dionne Brand

A revolutionary collaboration about the world we’re living in now, between two of our most important contemporary thinkers, writers and activists.